The Eco Warriors last year, (now P1, P2 and P3) took part in a sponsored litter pick to sponsor a polar bear at the Highland Wildlife Park and our name is on the plaque. 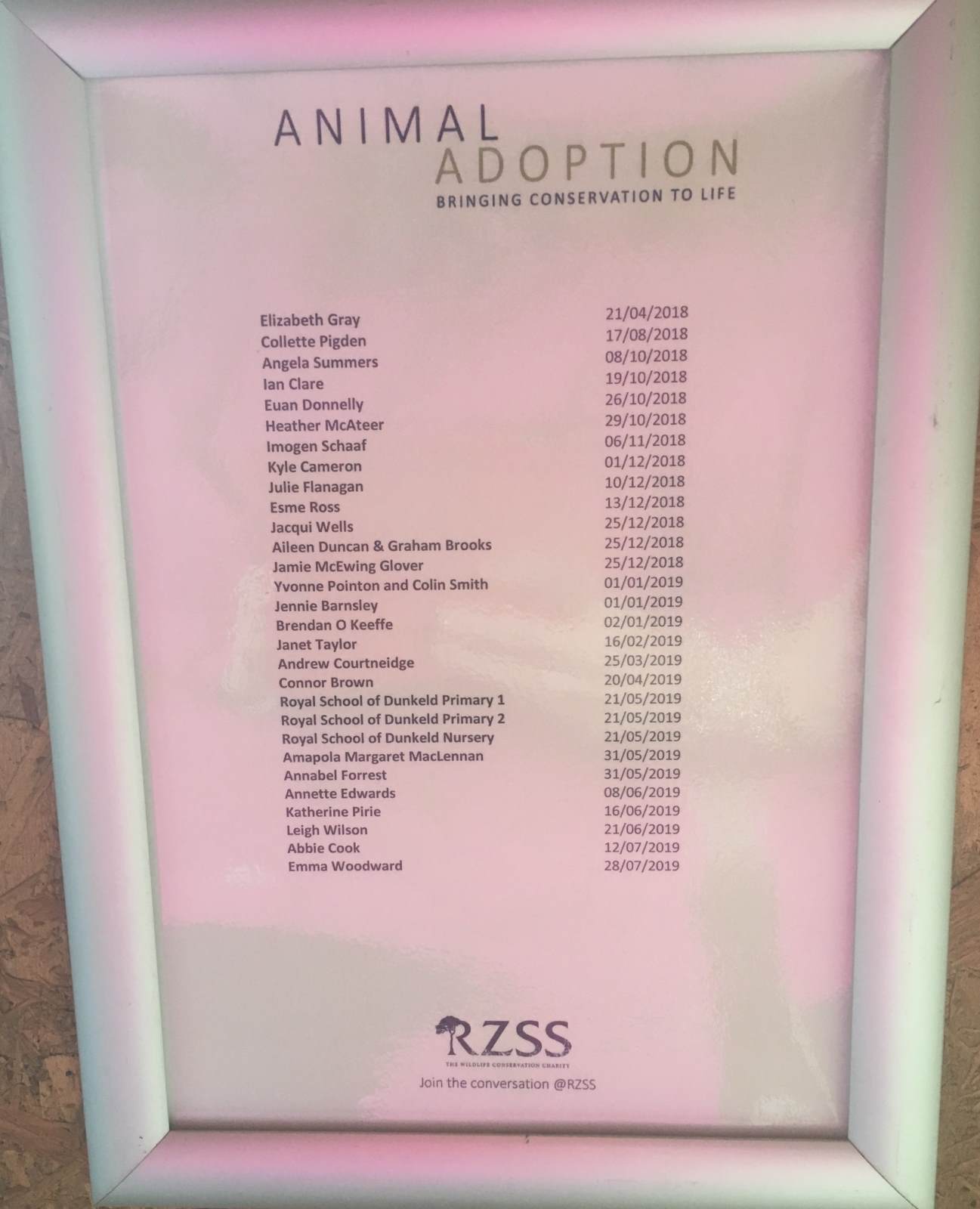 Primaries 3 and 4 enjoyed a visit from the author David MacPhail on Thursday 25th April when he came to share his new book ‘Torfinn The Nicest Viking and the Dreadful Dragon’.  He read the first chapter of the book and the descriptions of the characters really made us laugh.   He also talked about  how he invented his hero and everyone wanted to learn what their Viking and dragon names might be using the secret code in his books. 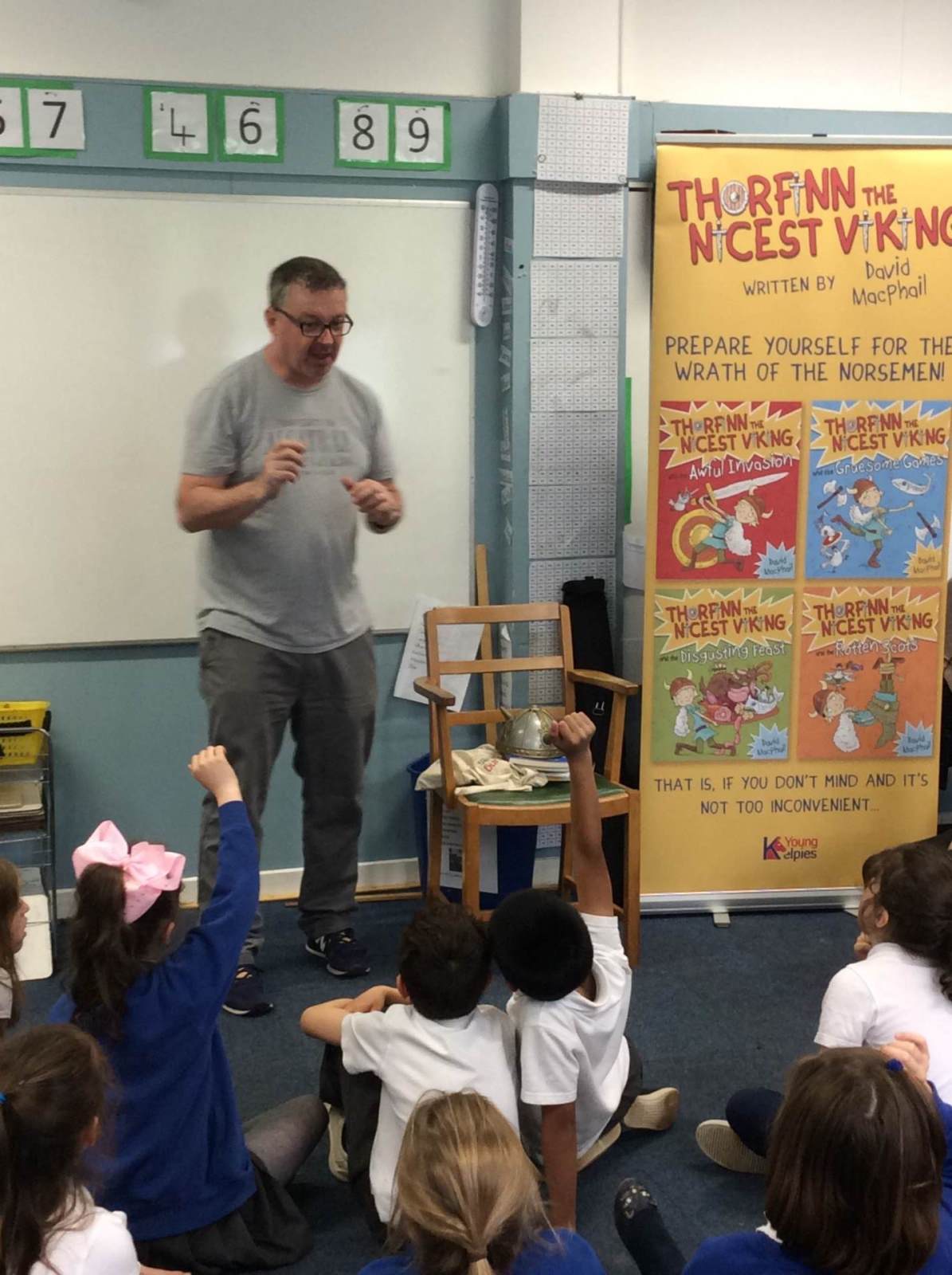 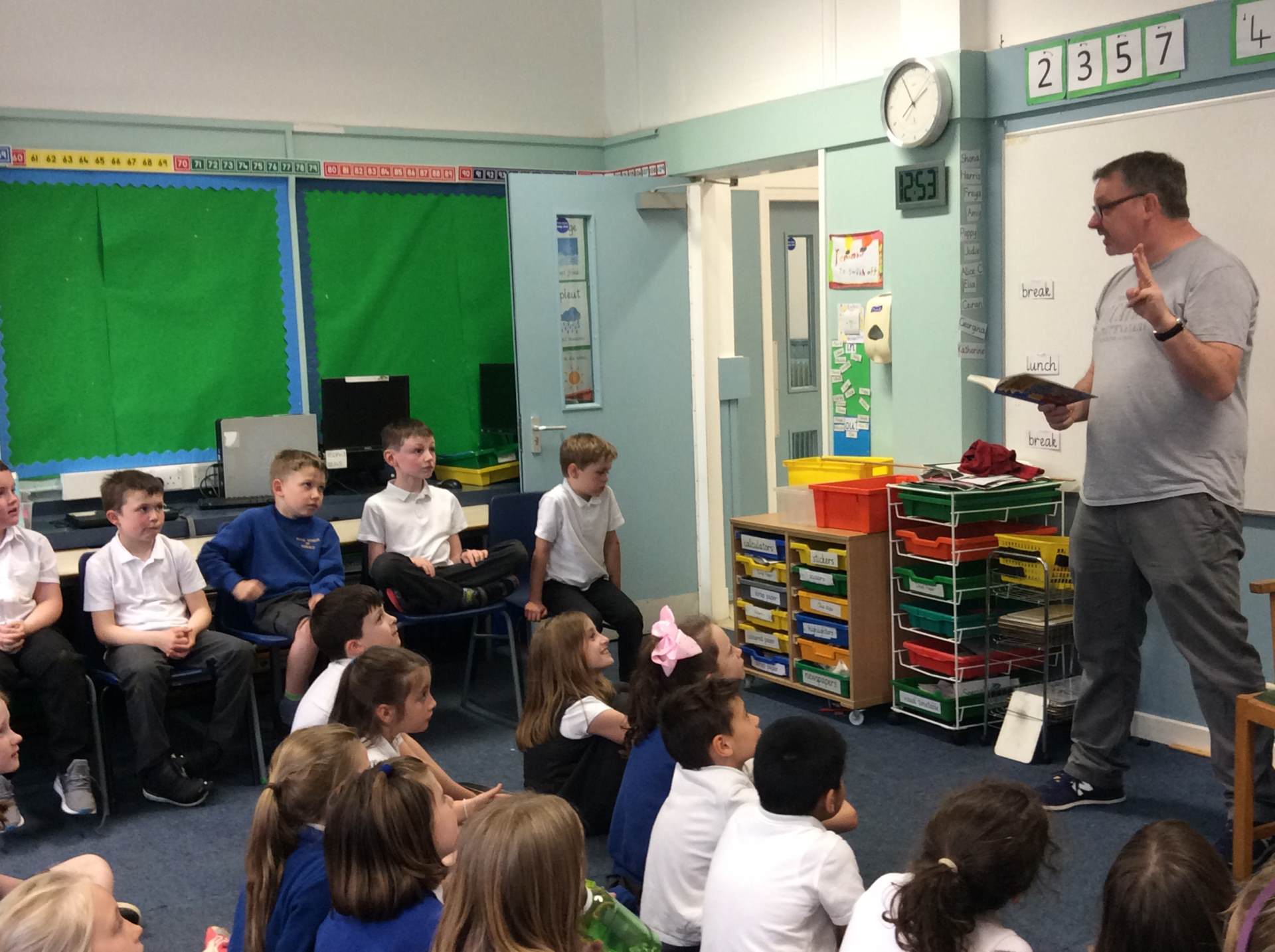 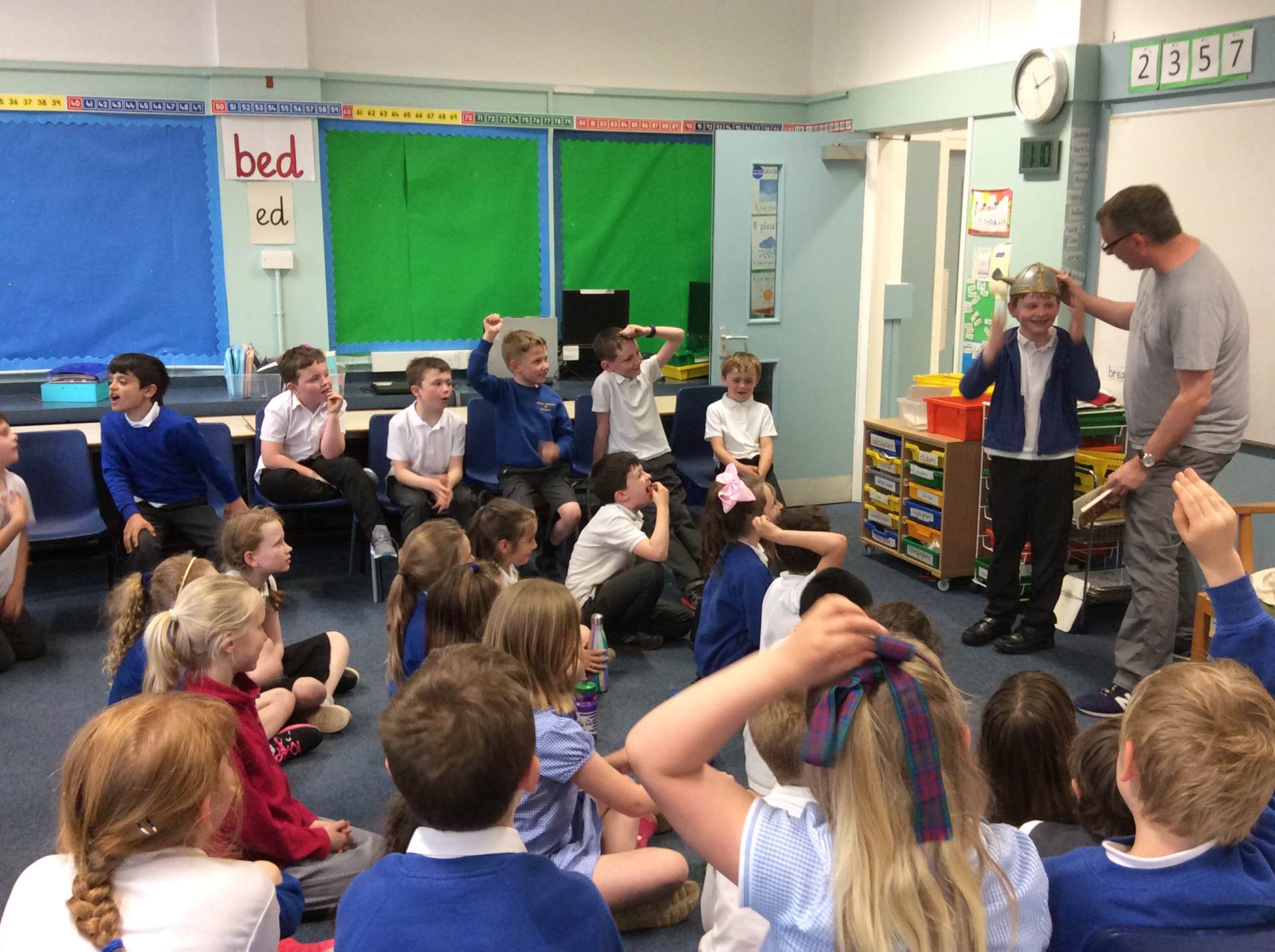 The children involved in our Glee Club have been working so hard on their singing and choreography during our weekly lunch time club as well as on our after school club. I am pleased to say that their hard work and dedication has paid off and RSD Glee Club are through to the next stage of the competition!

In the first heat on Monday the 25th of March we competed against 5 other schools from PKC, there was a further 2 heats on the Tuesday and Wednesday nights of that week. A winner was picked from each night, as well as 4 other choirs that the judges picked to go through. These 7 choirs will compete on Tuesday the 28th of May. This night will see the Perth and Kinross Council winning choir going through to the next round, which is against the winning choirs from all other competing councils in Scotland.

Our Glee Club are already working hard on their new set song which is ‘The Champion’ by Carrie Underwood.

We are all very excited about the next stage in this competition and we wish Glee Club the best of luck! 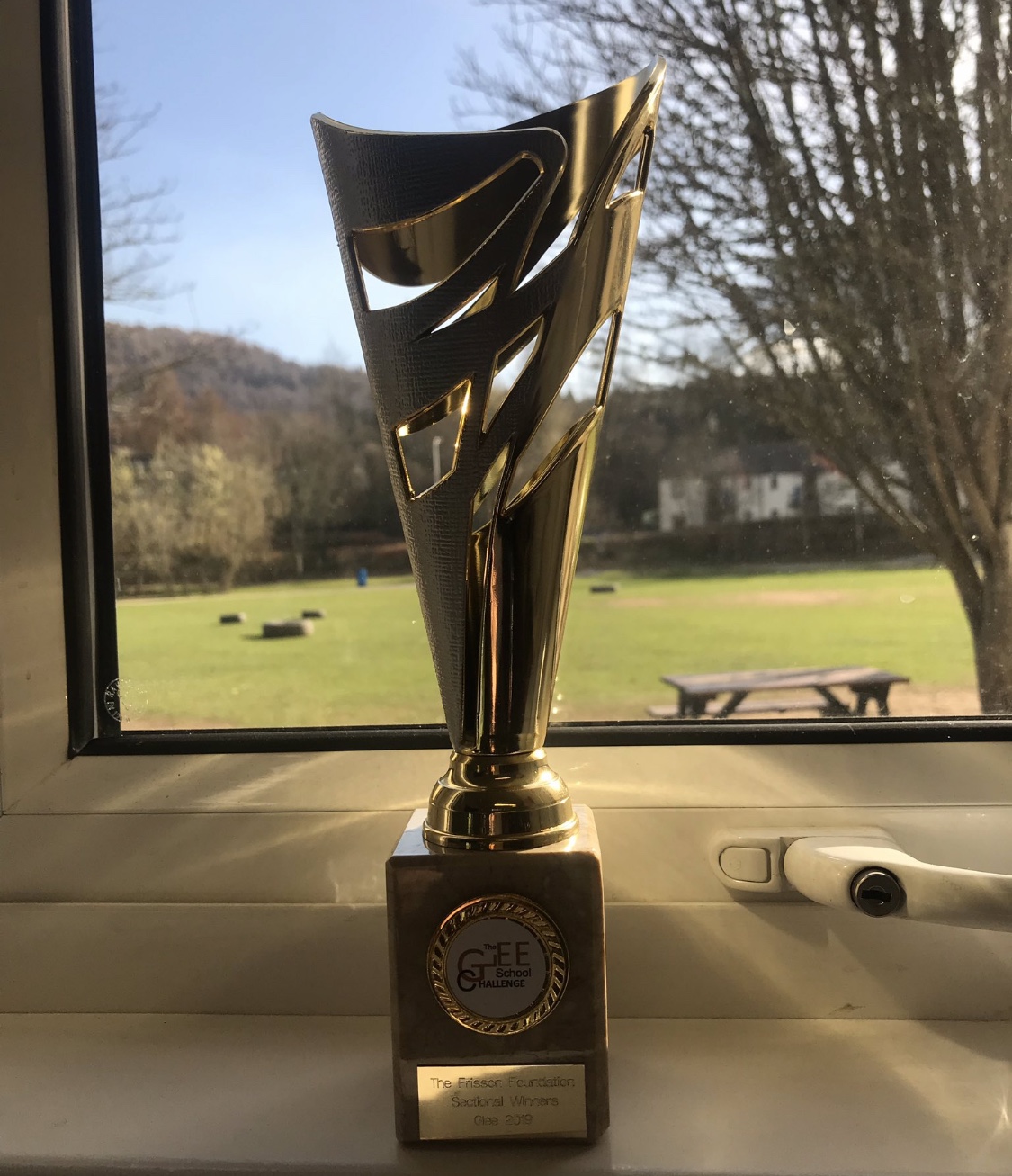 Primary 6 and 7  attended the annual cross country championships at Scone Racecourse in March where each child ran the mile and half course. Rowan and Tom from Primary 6 placed in the final three and received medals for their achievement.

This year we again took part in the annual Big Pedal event. Schools across the UK record their daily totals of pupils, staff and family members who cycle, scoot or walk to school. The Health Heroes group had great fun promoting and running events throughout the week for the whole school including a visit to the school by the smoothie bike where each pupil got to have a smoothie made by a blender powered by a pedal bike. We also had a day of bike skills from Adam of Progression Bikes in Dunkeld. Our new Bike Crew were formed and they have already been out and about taking the smoothie bike to the residents of Rivendell Care home.

Our annual ‘Joyning the Learning’ event was a great success. Linked to our Invaders and Settlers topic, classrooms from nursery to P4 were transformed into Viking Longships, Viking homes and Viking market places. The older children transported us back in time to the Roman era and parents were able to visit Hadrian’s Wall, Roman markets, Roman villas and Temples and Roman baths. The children enthusiastically dressed up and stepped in to the shoes of historical characters for the evening regaling visiting parents with historical facts and transporting us all to times past. Here are some pictures from the evening…..

Thank you to all our parents and families for supporting the children  - feedback from you all on the night shows how valued this event is with children and adults alike taking ‘joy’ in the learning by ‘joining in’ with the learning.

We had a special visit to assembly from Margaret Scott the treasurer of the Leisure Group on behalf of the Robbie Melville Trust. The trust donate money to the school every year in memory of former pupil Robbie Melville. We are very grateful for the donation of £300 which we hope to put towards P.E equipment and kit.

Today, Bike Crew held a Hi-Vis event for the whole school. We had a Be Bright, Be Seen parade and the brightest person in each class won a prize. We also ran a road safety quiz to raise awareness of the importance of wearing bright clothing when cycling or walking in the winter months. We can't wait for our cycling skills days next week. Don't forget your bikes and helmets on Thursday 8th and Friday 9th of February. 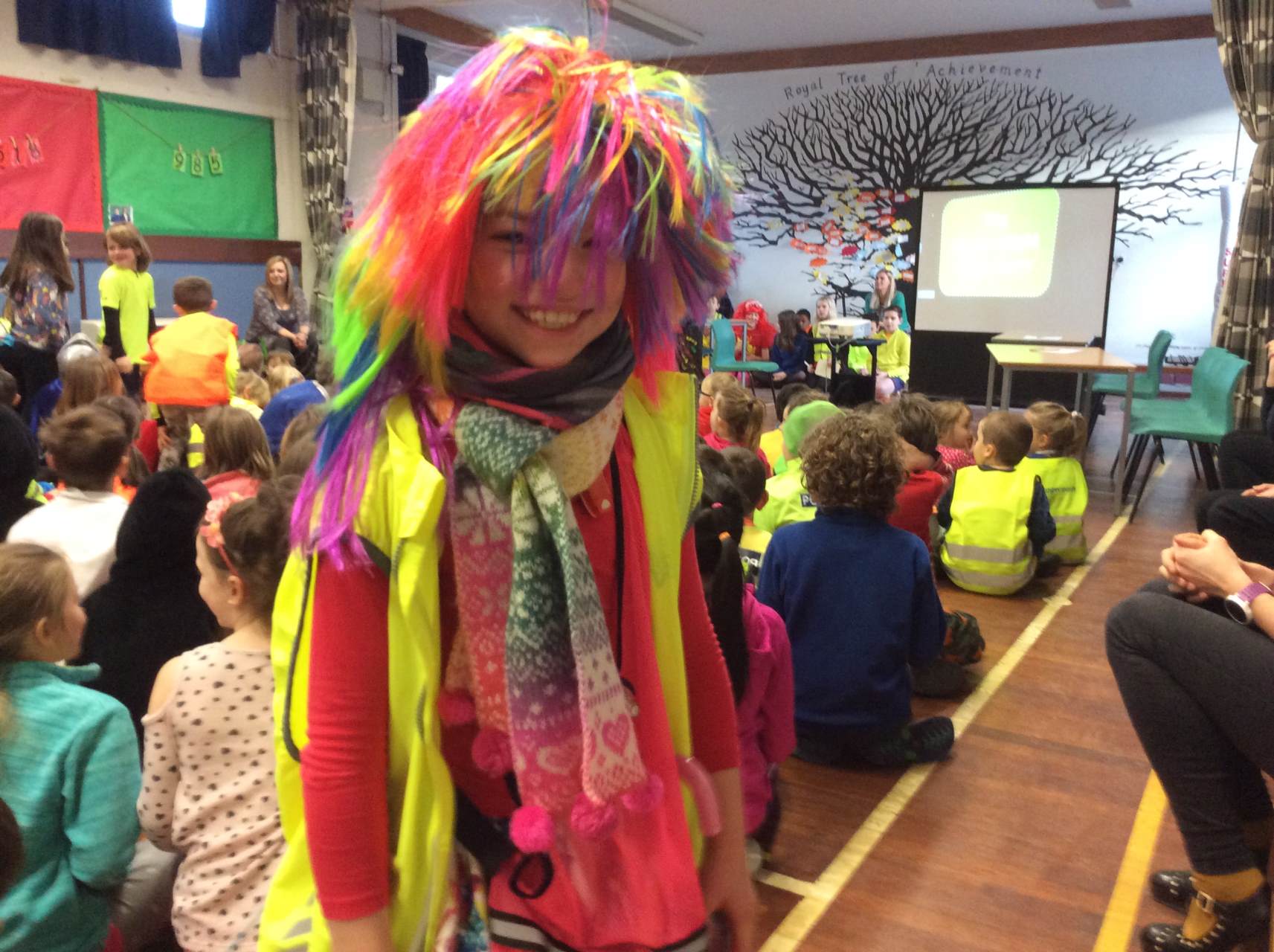 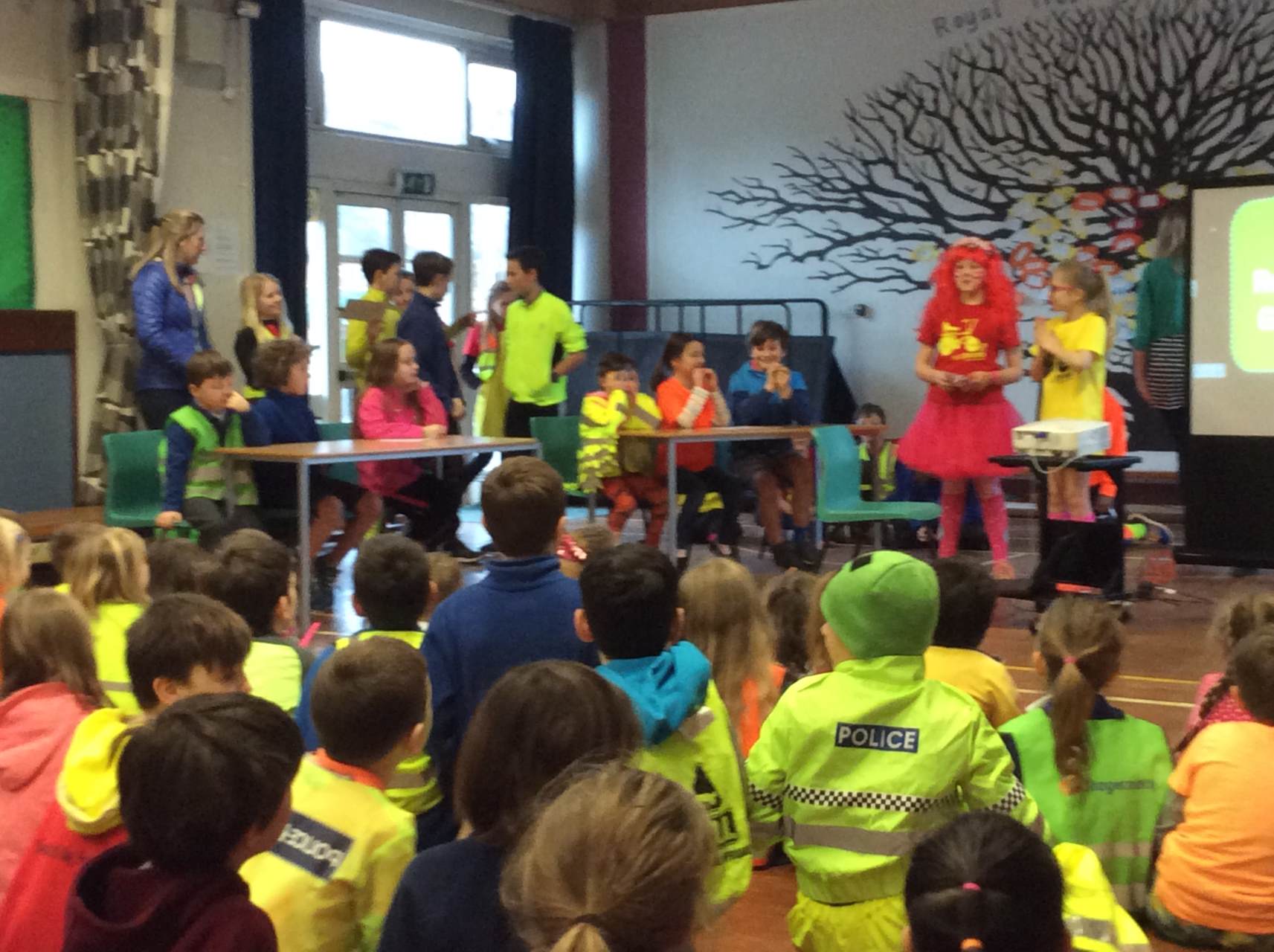 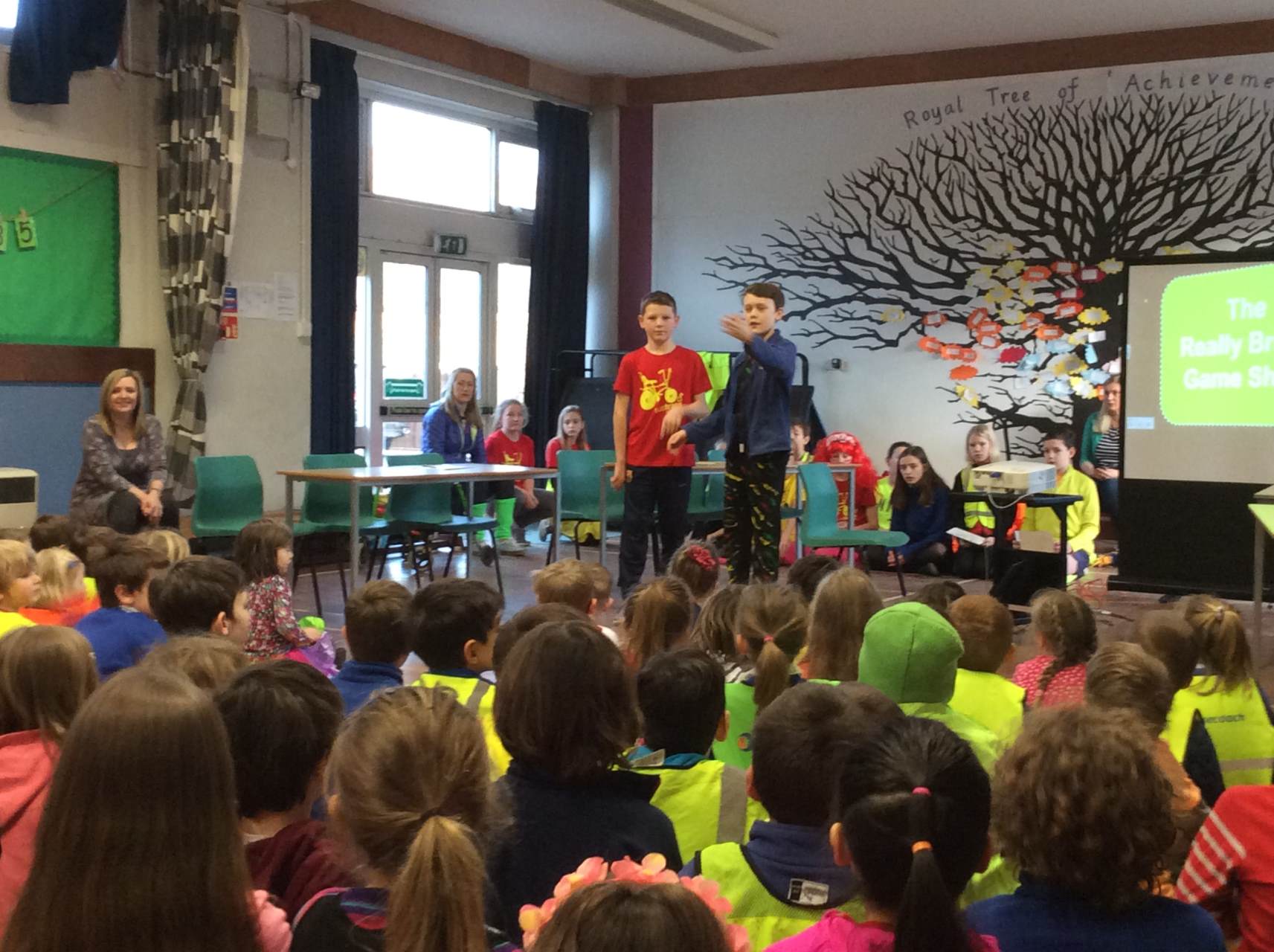 22 pupils from Primary 6 and 7 took part in a Perth and Kinross cross country event today at Scone Racecourse. Congratulations to all the children who ran the one mile course. All the children showed great determination and resilience when completing the muddy, long distance run. We are extremely proud of all of the children and a special mention must be given to Kerri (P6) and Lewis (P6) who both came in second place and to Lara (P7) who came in fourth. What a fantastic achievement! 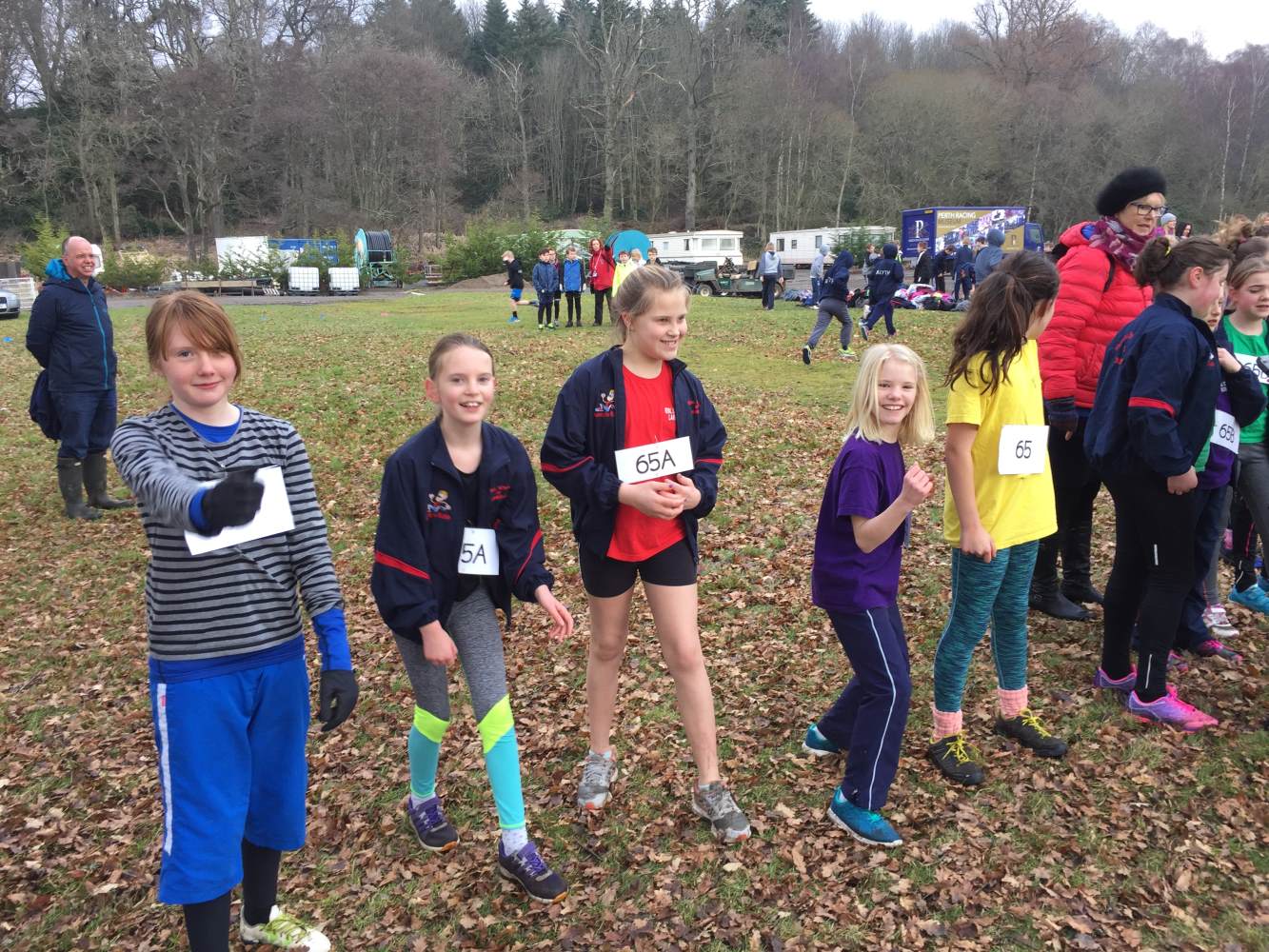 Primary 3/4 treated pupils and parents to a fantastic Victorian Assembly last week. They demonstrated what life was like in Victorian times; we think school must have been a very tough place to be in those days! They taught the rest of the school about the subjects taught, what games children played at lunchtimes and told us how strict the teachers were! Pupils have been researching this time period to try and find out what our school was like in the past. Well done to all the pupils and Miss McRae for putting on a wonderful show.  We look forward to learning more about Victorian school days at our Royal Garden Party in June.

On the 2nd of February Primary 6/7 presented a special 450th Birthday Assembly in Little Dunkeld Church. Parents, former pupils, community members and current pupils and staff were treated to a retelling of the school's colourful history. The assembly launched the first of many events to celebrate our birthday. Well done to the children who were confident and humorous throughout the performance. Their performance even made the newspapers. 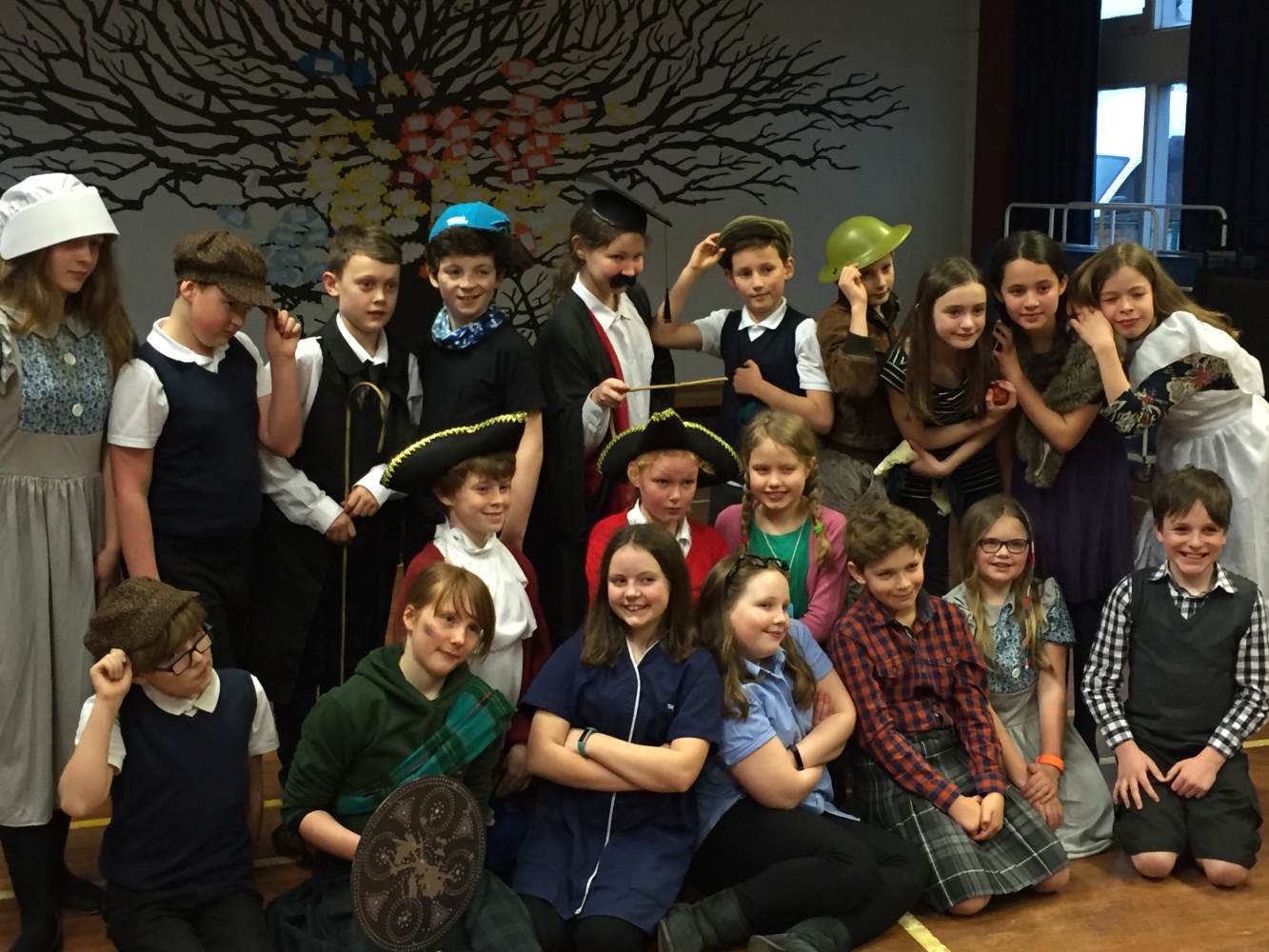